skip to main | skip to sidebar

Who is telling the tale?

The Book of Judith is full of the male gaze, and filtered through what we need women to be: loyal, courageous, beautiful, chaste. We only know Judith's story at all because the distaff chroniclers preserved it with the other apocrypha; plus I think the women just weren't going to let this one go.

Judith, beautiful and chaste, defeats the enemy through her courage and cunning, outwitting and outfighting every man in the book, friend and foe. She does it while maintaining her key aspect of chastity, but I think Judith would have fucked Holofernes if she needed to get the job done, or just if he appealed to her. But she just got him drunk instead, and, as I have her maid say, "he never laid a hand on her even though you could tell he wanted to if you know what I mean."

In a way, the Judith story is a parable for childbirth, and the artistic treatments support this: the painters always go straight to the action and ignore the aftermath, the bloody bag that the maid carries the head away in.

Here I've drawn the weave of the basket, using three versions of the story (repeated as needed to fill the space): Judith's, straight from the Apocrypha. The maid's, written in the vernacular from the point of view of the person dragged along because she can't say no (the maid's story is in the comments); and the highly edited tale as seen from the point of view of Nebudchadnezer, Holofernes, the Judean counselors, and the captains of Holofernes' camp, preserving the most "manly" parts. Judith's and the maid's create the weave of the bloody bag, but Holofernes' blustering boasts are the blood dripping through the warp.

Our life for yours

Joshua was able to defeat Jericho because of Rahab. But there are no heroes here. Joshua kills everyone in the city except Rahab and her family, who choose betrayal over death. Rahab is a prostitute, so you have to wonder what her life was that bargaining her life for the sure death of her people was a choice she felt she could make. 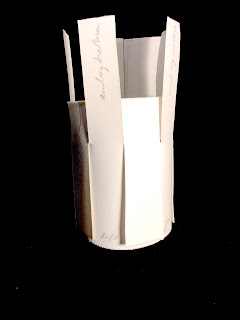 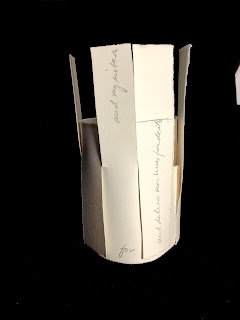 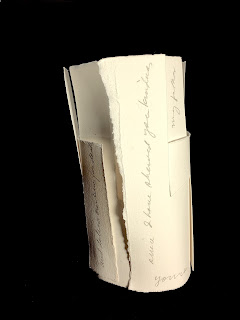 Posted by Alexandra at 5:59 PM No comments:

Made in response to a call for entries for works about Chicago. Not sure if this is exactly what they were looking for, but I figure someone else can do the pretty picture of the boats in Burnham Harbor. (although I have a couple of those too) 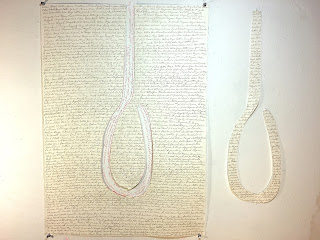 "Our country's national crime is lynching. It is not the creature of an hour, the sudden outburst of uncontrolled fury, or the unspeakable brutality of an insane mob. It represents the cool, calculating deliberation of intelligent people. No emergency called for lynch law. It asserted its sway in defiance of law and in favor of anarchy. First, lynching is color-line murder. Second, crimes against women is the excuse, not the cause. Third, it is a national crime and requires a national remedy. This was wholly political, its purpose being to suppress the colored vote by intimidation and murder. Thousands of assassins banded together to spread a reign of terror. The purpose was accomplished, and the black vote was supressed." -- Ida B. Wells, excerpted from speeches on lynching
Posted by Alexandra at 5:01 PM No comments:

Two of the more horrifying passages of the Old Testament are the Book of Ezra, and the story of the rape of Dinah and the retaliatory murder of the Hivites.

Most of Ezra is the prophet exhorting the people of Israel to put away their "strange" husbands and wives and "such that are born of them." In other words, to repudiate the families that the Israelites, as immigrants in the land, had taken on, in defiance of the Lord, who was (according to Ezra), horrified at this mingling of the holy seed. Personally I just think Ezra couldn't get laid and was jealous.

I've turned the story literally around, writing the Bible verse in semi-mirror writing, and reimagining the story from the perspective of the wives, having them exhort the people to make a covenant with God to love their strange spouses and children.


Dinah is another Old Testament woman denied sexual agency. Shechen the Hivite supposedly rapes "defiles" and there's some dispute about what that truly means), but then falls in love with her. His father makes a deal with Jacob to have all the Hivite men circumcised so that Shechem can marry Dinah. While they are recovering, Dinah's brothers murder all the men on the rationale "should they deal with our sister as an harlot?" I like to think of the story as Dinah falling in love with Shechem; his murder and that of his people was retaliation against her for demanding and acting on her own sexual freedom. There's a wonderful novel that tells Dinah's story from this point of view, The Red Tent.

Posted by Alexandra at 5:33 PM No comments:

The Book of the Women

Back to the women of the Bible, some works with a focus on "hidden" women like those without names, or mentioned in passing, or critical to stories that nevertheless warrant barely a mention. Right now I'm working through iconography and not thinking too hard about statements or artistic vision. The works are literal, almost illustrative, but still using words as substitute for line and form. Working in pencil on mostly clear white paper. I tried a couple with a richer color scheme but they aren't working yet.

Here are the first four:

Posted by Alexandra at 8:29 AM No comments:

100 ways of looking for here

The people who followed my exploration over the past several months of the concept of "here" perhaps understood before I did what "here" was. It took me 98 drawings to get there. 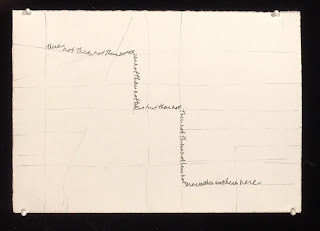 It's taken me four years, almost to the day, and 100 drawings to find out where "there" and "here" are: the literal, emotional, and artistic journey from my life as it was and my life as it is.

The threads were all there, from the empty holes and the crumpled paper, the loss and detritus of the past, the walks and the lines that moved me from the old space to the new.  The dead ends and the blank walls, the thoughts that fell off the edge of the paper, the stepping stones and the vessels filled with what is.

But I am here. 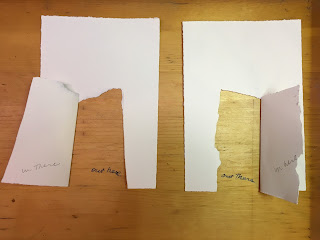 Posted by Alexandra at 10:27 AM No comments:

There are things that don’t exist in the world— is it realism or abstraction to make a recognizable drawing of a fantasy object or person? Or to draw something that isn’t something? Is a line representational, or abstract? What about writing? Is it yet more abstract as poetry? If you repeat a single word, how long will it retain its meaning?
Drawing ability can be dismissed as irrelevant, a parlor trick.  But as I revived myself as an artist over the past several years, it has led to my current work—both drawing from life as a daily practice, as well as taking different approaches to abstraction-quick simple line studies, with and without words, more complex works on specific themes.
I work with paper, using pastel or pencil, because of the tactility and immediacy of this substrate. I use it for its impermanence, and because it keeps me from being too precious and attached. Subjects are stripped to the basics—a landscape as blocks of texture, a forest as lines on a page, substituting the written word for the drawn line. I draw the world from the bones out.
My current work reconciles these paths—my ability as a draftsman, my exploration of the world through abstraction, and my writing. I am combining these threads of representation and abstraction, as well as my identity as a writer and poet with works on the theme of hidden women; a public art project to engage older women; a memoir and drawings about late life disruptions; an exploration of the concept of “here” and where I am in relation to it. The drawings beg participation; they are still life performance art. Using stationary frames, I create an illusion of movement, triggered by a word, or a shape, or the tearing and rearranging of the paper itself. The viewer cannot escape taking part, imposing their own interpretation, or decoding the message from their own inner dialogue. These themes converge: the stripped-down wisdom of the crone, the essentiality of the abstract, the hidden and the silenced in our society. 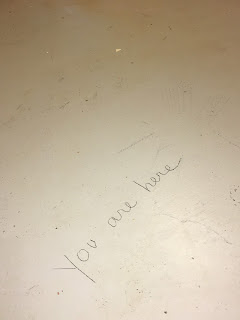 Posted by Alexandra at 10:20 AM No comments:

Alexandra
A gardener, a cook, an artist. My hair is pink and my soul is old.